s package and want the new president to fail.  I mean, if he fails then America, and Americans would suffer the consequences of his failure.   It means that poverty would be at an all time high and ultimately this will result in the economic demise of one of the greatest countries in the world.  You have to be an incredibly spiteful and a stupid individual to wish this and believe that the economy would survive this blow.  Anyway, here’s some tunes for those haters.

Township‘s Township.  I saw these guys a couple of weeks ago at the band J.A.C.K’s record release show, and they blew me and my lover away.  Granted I’m not a huge fan of classic rock, but these guy’s professional delivery, exceptional live playing, and general awesome stage presence made me buy their CD at the end of their set.  Faves: Sinister Minister, Beaver Fever, Beyond Free,  Jack Shack, Burnin.

J.A.C.K‘s Deletist.  The band that I came out to see that night and who I stayed for only one song because…  Well the reason is quite pathetic and I’ll save myself the embarrassment.  Anyway, the vocals for J.A.C.K. is like the gritty goodness of Judas Priest’s Rob Halford mixed with the powerful vocal range of Guns N Roses’ Axl Rose over some psychedelic blues rock.  These guys are playing K&M Bar on April 20th.  Faves: Dracula, The Leader, I Cut Off My Arms, Extinguisher, Rainbow Blood.

Man In Gray.  The first time I witnessed to the spectacle that was Man In Gray it was at a Deli Show. I stared in amusement as the lead singer was performing while a dog was attached to her hand.  Yes the dog was biting her but she didn’t stop singing and tambourine shaking.  Unfortunately, as of late spring  last year, Man In Gray is no more.  Beside Proton Proton, yet another great band that passed away, Man in Gray was definitely one of my favorite live acts.  I miss these guys, luckily I still own their raucous riot Man In Gray Tour EP.

Torche‘s Meanderthal is kind of like rock pop vocals over sludge metal.  No, there’s no growling, just harmonizing vocals, which they do so well.  I discovered these guys through Earfarm last year and I’m not at all disappointed.  I initially downloaded the track Healer which lead to some research on the band and a purchase of the entire album.  The next step is a t-shirt purchase.  These guys will be playing at Highline Ballroom on April 19th.  Faves: Triumph Venus, Grenades, Pirana, Speed of the Nail, Healer, Sundown, Little Champion, Without a Sound, Amnesian.

Susu’s Win. Susu is like if Sleater Kinney and Hot Snakes joined forces.  This artsy noise rock trio is everything I need on days I feel exceptionally disgruntle.  I find their wailing guitars, drums, and vocals very satisfying.  Sometimes I even find myself dancing.   These guys are playing on April 4th at the Annex.  Faves: All the songs. 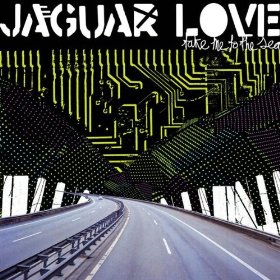 Jaguar Love‘s  Take Me to the Sea is fun fun fun.  In fact, they totally remind me of Man In Gray with all the yelpings, squeals, and outright yelling.  They fuse an intoxicating X-Ray Spex, Kathleen Hanna vocals with a sort of funk/hip hop punk vibe into their rock.  They sound like they would be a great band to see live.  Faves: Highways of Gold, Bats Over the Pacific Ocean, Jaguar Pirates, Vagabond Ballroom, Humans Evolve into Skyscrapers, Antoine and Birdskull, My Organs Sounds Like…

Love is All‘s A Hundred Things Keep Me Up at Night.  Is another album that exudes fun and reminds me of X-Ray Spex.  With Cyndi Lauper vocals,  Love is All’s 80’s power pop indie rock sound just makes you want to get up and dance.  This is another band that I’d love to see live.  Faves: New Beginnings, Give It Back, Last Choice, Rumours, Big Bangs Black Holes Meteorites.

Jean Grae‘s Jeanius. The things I love about this album is the guts,  the humor, the mad intelligent flow… Yeah it’s solid.  You can feel the adrenaline rising in each pause, you can feel the explosion coming, and when it does all yuh pores raise. This is full of enlightenment and whoever said that Hip Hop is dead is looking to the wrong places.  Open your ears to the non-traditional sick shit.  Faves: 2-32’s, Don’t Rush Me, My Story, The Time is Now, #8, This World, Smash Mouth.

Telepathe‘s Dance Mother.  So against my advice, my lover downloaded Dance Mother.  I was opposed because I’m really not feeling the new wave electronic “rock”  that’s reasserting itself in the music scene.  But even with my disdain for this reassertion, I’m kind of pleased that she didn’t listen to me, because I did find a song or two that on first hearing did bring some joy and usage of phrases such as “that’s kind of awesome.”  At times Dance Mother’s style strangely reminds me of  New Kids On The Block (particularly In Your Line) and Enya (particularly Can’t Stand It)with some 80’s sounding techno mixed in.  These guys are playing Webster Hall April 10th & 11th and the Annex on April 15th.  Faves: In Your Line, Can’t Stand It, Trilogy.

Witchdoctor‘s The Diary of an American Witch Doctor.  With Witchdoctor’s smooth, liquid butter flow, haunting atmospheric melodies and thought provoking lyricism, yes indeed, Diary… will cast a spell on you.  Think Outkast‘s Aquemini album.  I discovered Witchdoctor after watching an episode of Aqua Teen Hunger Force.  There was an add advertising the album.  It was over for me when I heard the short clip for one of the songs. Faves:  Just Like You, Spell on Them Hoes, Cream of the Crop, Oxygen, Jake Got Ya Body, King of the Beasts.

3 thoughts on “Recession Chardonnay: The Bail Out”