On episode 20 of BTRtoday‘s When We See Each Other (WWSEO), I chatted with Minnesota Trans rapper Sci-Fi. We talked about Trans visibility in the hip hop scene, her creative process, her new single “Bloom”, which is available on all streaming platforms, and she blessed us with some bars. You definitely need to check her out! Her flow is so smooth and rich. You can listen to the episode HERE.

Also, share and subscribe to this podcast where ever you listen to podcasts. Rate and review WWSEO at Apple podcast. It helps with the algorithms!

When We See Each Other is a bi-weekly podcast centering the work of BIPOC, queer, Trans, non-binary musicians/artists, and also friend musicians I’ve known for some time.

The pod gathers from a broad range of genres, stretching from spoken word to indie rock, pop, alternative, noise rock, hip hop, reggae, dance hall, metal, calypso, funk, etc. The show is sort of a mixed bag, where artists are interviewed on their creative process, and how identity influences their work.

This podcast is produced by Stereoactive Media. 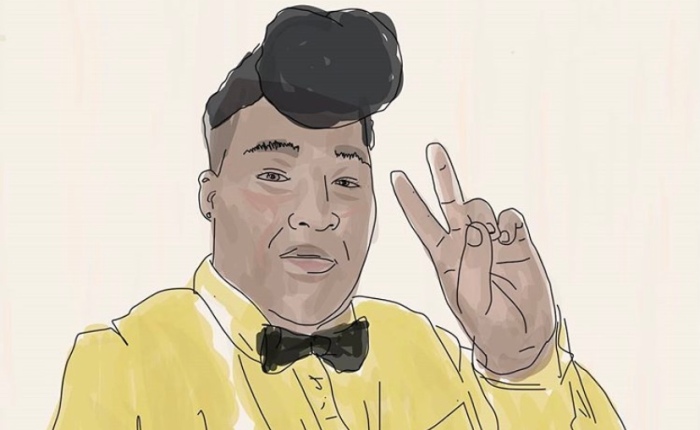 On episode 10 of BTRtoday‘s When We See Each Other, I chatted with the politically conscious rapper, Billy Dean Thomas. We talked about everything, from the elections to what book they are currently reading. Billy Dean just recently dropped their album, For Better or Worse, which is available everywhere. I highly recommend checking it out! It was a real pleasure talking with Billy Dean, and listening back to the convo gave me hope for the future. You can check out the interview HERE.

On this episode of BTRtoday’s When We See Each Other, I recap with some music from Anjimile, NYALLAH, Witch Prophet, and I also played new music from Bethany Thomas, Spring Silver, Jay Americana and Shelz. You can listen HERE.

This podcast is produced by Stereoactive Media.

On the latest episode of BRtoday‘s When We See Each Other, I interviewed Witch Prophet, a soul artists from Toronto, about their album, ‘DNA Activation,’ as well as their experience in the music industry as a Black and queer artist. ‘DNA Activation’ is a rich blend of R&B, Hip Hop, Jazz and African vibes, that draws on Witch Prophet’s Ethiopian/Eritrean ancestry and heritage. You can check out the interview HERE.

Live tomorrow, Wednesday, August 31 at 8:00pm, I, Calypso Sally, will be spinning some dope tunes on Washington Heights Free Radio (WHFR) Broad Strokes. It’s gonna be a boombastic-tellyuh-fantastic night, since I’ll be flooding WHFR’s stream with the freshest hip-hop tracks, showcasing women rappers (even when they’re not categorized as such). I think they’re real, and have the ovaries to play by their own rules. As scandalous as it will get, they have a message of not being afraid to take on the status-quo in their own ways of expressing, class conscious, feminist, genderqueer aesthetics…

Anywhoo, for those of you that don’t know,  I have a radio show called Broad Strokes, and it streams live off the web every last Wednesday of the month. My dj name is Calypso Sally, but I don’t just play Kaiso, lol.

Check out the live in studio session of Holy Moly! this past June, HERE.

These guys are mad talented, and really down to earth folks. Their tunes make me want to stomp my feet and drink some gin, and as you will discover from the broadcast, I don’t like gin, hee, hee. I can’t wait for their record to drop!

Bringing you stories, live events, and much more, WHFR tries and remains independent of any corporate sponsorship.  So, if you like what WHFR is doing, you can donate by contacting them at info@whfr.org.  DIY forever baby!

If you’re in a band or you know a band and or singer/song writer that would like to do a show, contact me at: roarplanet@gmail.com.

Here’s a few more bands/artists that rocked it in 2008 (previous post: This Time of Year):

The Roots‘s Rising Down. The Roots is my favorite hip hop band. Album after album, they’ve never lost themselves due to fame, however realized.  They kept true to their identity and have taken the hiphop art form to a whole new level, that no one in the genre has been capable of catching up too. The mere fact that they are an actual band makes them shine even brighter in my eyes.

Reminiscient of a Fela album cover, just by looking at Rising’s album art you’re given a feeling of rebellion.  A rebellion against the now status quo standing of a rap/hip hop album: the complacent cool of living it large.

I hear and feel the revival: the rush of wanting something other than what has been dealt, or what we make ourselves believe in. This feeling is ever so present in the song Singing Man. Singing Man evokes the traditional Sinnerman running but with no where to run to once the well has been sucked dry. This album brings us closer to that essence, of where and how Rap/Hip Hop began, before it’s quantification.  Once Sinnerman realized the profit in his asethetic: discounted as an individual, as a peoples stripped of everything, why turn back now when the reasons for looking back means reliving an ugly truth that everyone is petrified by and there’s no profit in that, well maybe. And the future that you dream is just as horrific, if you follow what is being displayed in contemporary media who devel in the fluff. We all ignore the backlash, just waiting to bloom with it’s brooding revenge. It’s already begun.

Rising Down is the renissance of Rap/Hip Hop. It looks back and embraces the struggles and fight of a peoples… Not only is Rising Down a rebellion against…. it is a celebration of this unapologetic freedom to reject….

Faves: Lost Desire, I Will Not Apologize, Rising Down, Singing Man, Criminal.

The Magnetic Fields‘s Distortion. This album reminds me so much of Jorge Borges‘s poem Mutations. Maybe it’s because I was reading the poem while listening to Distortion. Or maybe it’s because the album sounds like a mutated Joy Division, that’s been distorted into a noise pop pulp fiction soundscape that’s centered on well written, humorous ballads that I secretly snicker about in a dark corner.  I really enjoyed Distortion. So much so, that Please Stop Dancing is responsible for this poem: Words.  Faves: Three-Way, Old Fools, Xavier Says, Please Stop Dancing, Too Drunk to Dream.


The Kills‘s Midnight Boom. The Kills is a electronic, rock, indie, pop duo, that I’ve been following  for sometime now.  With their lo-fi sound: danceable drum machine beats, dirty guitars, mixed with bluesy vocals and very catchy cynical lyrics, Midnight Boom is, maybe, my favorite of theirs.  Faves: U.R.A. Fever,  Last Day of Magic, M.E.X.I.C.O, What New York Used to Be, Night Train.

Duffy‘s Rockferry.  Like Adele, I consciously resisted Duffy when I first heard Rockferry at a Starbucks.  Fortunately for me, I got over my hypocritical snobbery, because this girl can sing some Motown soul.  Rockferry‘s sound maintains this back in the day lost love gospel with success, as you begin to grieve along with Duffy’s sorrowful vocal range.  You feel like crying too.  Faves: Rockferry, Warwick Avenue, Stepping Stone, Syrup & Honey, Hanging on Too Long, Distant Dreamer.

TV On The Radio, Dear Science.  Honestly, I don’t know what’s the big deal about this album.  Yes it’s good, but it doesn’t make meh pores raise (a saying from Trinidad, meaning, I got goose-bumps) as everyone is going on and on about it.   And when I say good, I mean this is a really well made and produced album, but there isn’t anything radically great as music reviewers ranting and cheers would have you believe.  It doesn’t change my hearing perspective or awareness, and maybe it’s because that wasn’t the album’s intent or maybe it’s just because there’s nothing new here.  If they’re not sounding like Seal or Eddy Grant, they’re playing Afrobeat and or Calypso music, like for instance the songs Crying, Dancing Choose, Stork & Owl, Golden Age, Red Dress all sound like a track from one of my favorite calypsoians, David Rudder or even Andre Tanker.   I did however appreciate the care and effort that these guys took into making this album.  I also appreciated their conscious lyricism that was critical of our current social and economic state, another aspect that makes me cling to the idea that Dear Science is a hybrid of a calypso album, because the very purpose of a calypsoian/calypso music is to critique and deconstruct the current events of society.  As much as I dig the fact that they’re mixing calypso and afrobeat into their sound, I still don’t get the hype, but then again music is so subjective.  Faves: Halfway Home, Golden Age, Family Tree, Red Dress, Love Dog.

The Comas‘s Spells will cast a spell on you, as they combine great progessive 90s indie rock with dreamy, imaginative songwriting.  Even though this album came out in 2007, my bandmate, Maggie, and I can’t help but refer to this album on a rainy everything sucks and I’m bored day.  Unfortunately, the band is on an indefinite hiatus.  Faves: Red Microphones, I Am A Spider, Come My Sunshine, Stoneded, Sarah T., New Wolf.