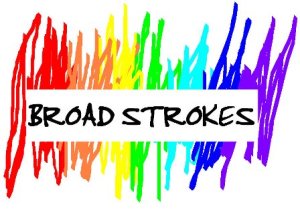 I know it’s been awhile since I’ve posted anything substantial, but I’m still here. Thinking about writing and not having enough time. Anyway, I will be on the air this coming Wednesday, June 29 at 8:00pm for my radio show Broad Strokes on Washington Heights Free Radio (WHFR). With me this month will be the alternative/folk band Holy Moly.

I saw these guys at one of NYC’s best DIY spots Fort Useless awhile back and they are truly amazing.

You can listen to last month’s broadcast HERE. Learn how to learn HERE.

Esme and Zami are siamese twins
Esme, the temperament of water, fell in love with whirlwinds:

The secrecy held in the world beneath the ocean.
After admiring the girl in the reflection she dove in

Living far beneath the surface, returning for fireflies in summer
Sometimes just to listen to the city’s rooftop raindrop drummers.

Zami, the temperament of fire, her blood runs close to her skin
At the bald of her hands and feet feel the rush of cold sin.

One night she awoke breathless, off her body cold sweat dripping
She ran out of space and slowly the walls crept in.

Anxious for air and with fervor in her muscles
Leaping for the night, scaling over walls and fences, Esme became bionical.

Esme and Zami are siamese twins
No overnight miracle of a mischievous nymph.

There was time for a breath between days for a hush
And defeat to soak itself at the root of a purpose.

Hear it escape in a wail, a laboring sigh to playful fantasies
Masked in the ringlets of an occasional lover’s kisses.

Zami was leaping over water over two nights
Stopping to rest, finding shade from the moon light

Under the thick yellow of a poui tree in bloom
Catching breath, crouching to her knees, smelling Esme’s perfume.

Blue moss, wild strawberries decorated her
The dancing Esme muses on stories told by her mother.

Tightly closing her eyes, she keeps the music to herself
Repeating the words in a lullaby.

Her mossy blue arms reach for no one
But the gentle caress of the ocean.

Zami bemused, came closer to the moon
Caught by Esme’s mystery about her lips, about her blue nakedness.

She found pleasures so much so she had forgotten
About walls and fences to scale, but found comfort in this harbinger.

Finally she held her breath and dipped her head in.
Surprised Esme, but not afraid she smiled and began to sing

Esme and Zami, they are siamese twins
Joined to the heart and mind ever since

Zami found shade from the moonlight
Under the blooming poui tree one night.

She pushed her chest out to embrace
The currents.  To kiss the waves.

I received it in the mail today
my very thin self-addressed envelope
not today I said out loud, not today
for you see, I’ve already felt the day to day
crippling blow, as I made my trek through
the drudges, through the thick mundane
automatic motions.  I have failed as a robot.
Regardless, I thought and grinned for chance
there’s still the possibility…  Aah yes the optimist
with her tireless audacity, with her juvenile beliefs
full of maybes, could be dreams floating like clouds
waiting to be caught, oblivious to the message in the
note starkly staring back: thank you, but no thanks.

So quickly the erasure has begun
as pieces of me are being removed.
From that heart, I’ve been gutted out
from that mind, my reflection turned into shards.

I was suppose to know it was happening
that the coils my hair makes no longer brought joy
and understand that a betrayal was for me to take notice.

But it doesn’t matter now, as all the tenderness
as all the dreams, like abandoned leaves, dwindle away
trapped in a dusty old box filled with memories, well forgotten
displaced by some new desire to excite the tête-à-tête.

So quickly the erasure has begun, in one day
what once was comforting as a simple embrace, a brush of the hands
is being replaced with talk of sleeping arrangements.

Hunger of havin nothin
but ah mammy swearin
“In Jesus name I’ll kill dis nigger.”
A bastard only screams
what his mama been taught
“You fuckin Nigger.”

Can’t embrace nigger
without de ills of being
the only Negro in Holland Michigan
even if the University invited you
the white faculty–with their cherry smiles–
says, “It’s because we needed a show and dance nigger.”

Even if your walls are covered with awards
fooled into what you can afford
to sit in Holland’s Gourmet café
two white construction workers
can still say, “Niggers are everywhere now.”

Can’t embrace nigger
without embracing Negro Joe
who dreams of jumping higher
running faster-climbing-swimming
bursting out his exile of skin.
With something to lose
never quite sure of what:
his legacy of having
dirt poor nigger skin?
his potential to all his possibilities
for true love?
Sticking his big black dick into
some white chick–any white chick?