I’ve been working with Magnetic Island, an exprimental, indie rock band based in NYC, on the single Subterfuge.

This past week the single premiered on Gimme Tinnitus.  You can check it out here: Subterfuge.

Not only did I play the drums, and the steelpan on the single, I also sang!

It was so great being back in the recording studio, and playing in general.  Even though at times it was a challenge, I learned so much from the experience.

Working with Magnetic Island was really refreshing as the sound is completely different from my band Telenovela Star.

I think the difference is that I was more focused on percision rather than power.  Less concerned with trying to prove how fast I can play or how much agility I have, but more concerned with how to bring out the song, make it tell the story that it’s dying to say.

Working with these guys also gave me the opportunity to break out my steelpan, which has been sitting in my closet for sometime now, and as well as to sing.  Being brought back to my first instruments, my voice and the steelpan, reminded me of why I desired to be a musician.  I was blown away.  I didn’t realize that I was capable of expressing myself through these other mediums, especially singing.  I realized that I can do more than carry a tune.  I have a voice.  I can sing.

All in all this was an eye opening experience for me, and I’m thankful to have had the chance to work with such talented, and genuinely remarkable musicians.  They brought out a side of me that was starving to be explored.

Here are some shots of us in The Fort recording studio: 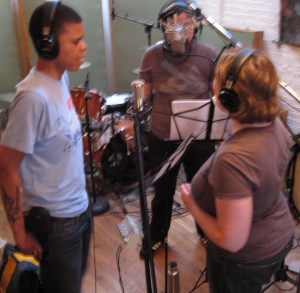