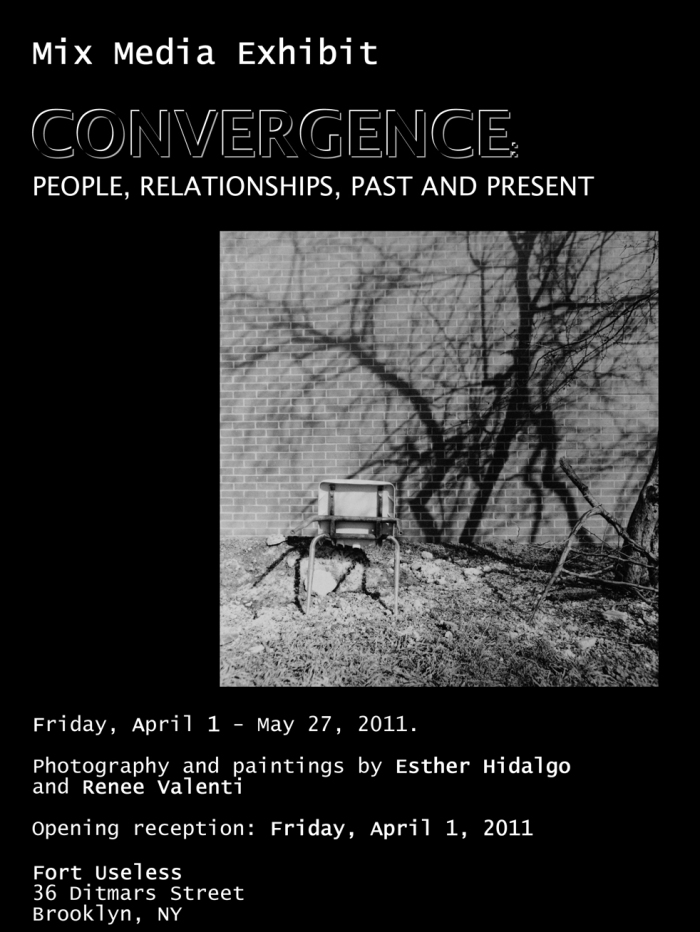 So, I put together a night of art with two amazing visual artists, Renee Valenti and Esther Hidalgo. It’s a mixed media exhibit with provocative post-modern paintings and avant-garde photography. We see through the eyes of these two women, as their work deals with the convergence of people, relationships, past and present.

Esther Hidalgo likes to use antique and vintage processes to create contemporary works.  She received her B.F.A. in Photography from the Corcoran College of Art & Design.  Her photographs have been displayed throughout the East Coast and in private collections across the country. She lives and works in Washington, DC.
Artist statement: “You Were Here” is an on-going project documenting scenes of development and urban decay primarily throughout Washington DC. These compositions, taken between 2004 – Present, are meditations on urban life and the intersection between that which is known and forgotten. www.estherhidalgo.com.

Renee Valenti is currently working toward her B.F.A. at Pratt Institute and is looking forward to graduating in December 2011. Previously, she had been pursuing a career in acting, and has enjoyed the cross-over of performing to visual arts, but also seeing ways how they can influence each other. She lives and works in Brooklyn, NYC.
Artist statement: I have been working with recurring topics like relationships and sexuality, day to day human experiences and connections, or disconnect, with others. In some of these works the personal experience of life in the crowded urban environment, particularly New York, has definitely come into play. The squishiness and fluidity of oil paint on canvas, paired with classical techniques has been what I enjoy working with most; however I also explore other mediums such as paper and photography. www.reneevalenti.com

In other news, I will be on the radio, Washington Heights Free Radio (WHFR), this coming Wednesday, March 30 at 8:00 p.m.

I’ve been in a downloading craze lately, mostly Soca and Calypso, but there’s also some Dub, and Indie Music, maybe even metal. Lol, we’ll see on Wednesday.

In the meantime, you can listen to the interview with Mindy Abovitz, Editor-in-Chief, and founder of TOM TOM Magazine, a magazine about female drummers, HERE scroll down to listen.