I have been trying not to feel for awhile now, especially when I got the news about my younger brother’s death. What is the use of feeling anything, when there is not anything that can explain why, and even if there was an explanation, it still will not prove to be comforting?

I have experienced this sort of loss before — the known inconceivable… I think now, I have become so use to not going to places where it hurts the most, I have been consciously mindful of stopping myself. Locking something too painful to deal with in a place where, maybe, I will never have to visit? This has made me even more bizarre and un-relatable…

I could not attend Jason’s burial. The only way I was connected to saying a final goodbye was by keeping in touch with my other siblings. It was incredibly disjointing — a complete disconnect, that continues to haunt me — even as I try my best to ignore it. In a way of bringing some semblance of letting go, I have been slowly writing… But, here, — in the process of writing, as its effectiveness as an aid, a form for closure — this form of a ritual I have continuously chosen for dealing with most things which disturbs me, even here, there is not any comfort, and it does not explain anything.

When the program for the burial arrived, I could not look at it. I knew if I stared for too long; looking for some understanding of why I will never see or hear Jason again, it will be a crippling devastation. A devastation where I was and am unsure of my return. I’ll have to contend with this unexplainable knowledge in this unsatisfying state, that he is dead and never coming back, and everything we experienced together is left in this space, this void where nothing moves, nothing grows, nothing reconnects… 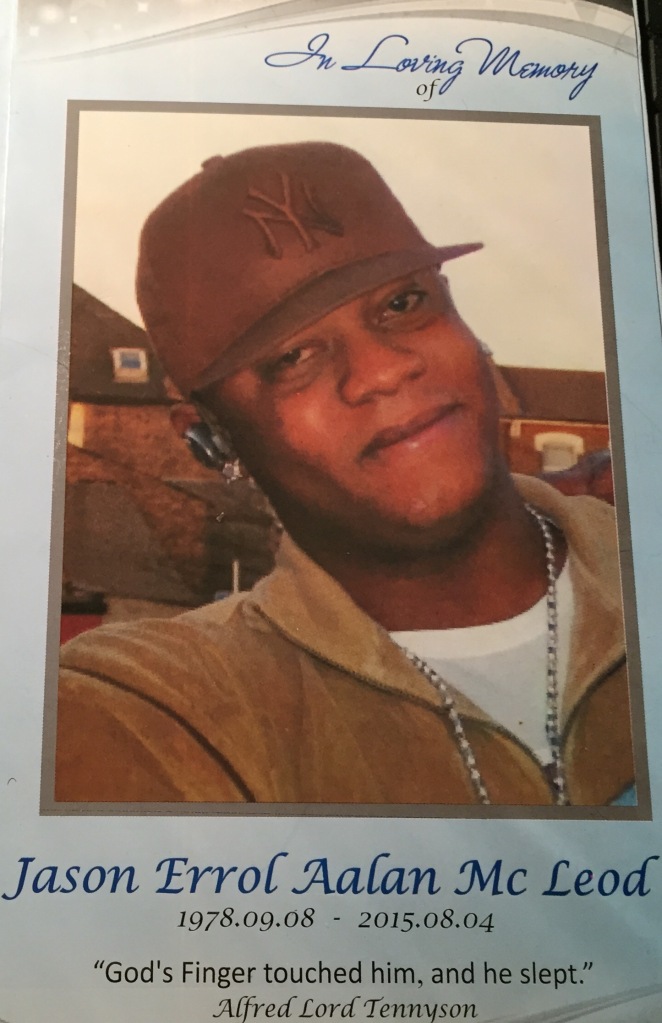 I look at this program and its encapsulation of my little brother’s existence. I look at it with the same distance I have for everything that I can’t explain, and exhausted by the energy needed to get close enough.

These are the words I wrote for Jason:

Jason never asked permission for anything. Many times this arrogance was unnerving, and the question of, Who are you to have such an audacity?, would arise. I asked it throughout our childhood. I honestly believe, if he was ever asked this question, he’d simply reply with all smirks, “Well, I am Jason Errol Aalan McLeod.” I may have been the closest to experienced Jason’s budding arrogance, as I still remember when were kids, and he sold, unaware to me, my bike.

Even though Jason is two years younger, the dynamic of looking out and caretaking of a little sibling was reversed, he took care of me. He took care, wholeheartedly, in his support of my then unknowing aspirations and endeavours of becoming an artist. He was present for all of my first singing group’s rehearsals. Jason possibly is the first person whom saw and accepted my dabblings as potential, as he acted as the singing group’s business consultant and manager. At fifteen, he believed in me, when I did not recognize it.

Jason’s death is a tremendous weight on my heart, because even in our distance and the possibility of renewal of where we left off, there is now no longer a connection. An overwhelming void, which I cannot begin to understand and reconcile is where and what is… What comes close to any comfort about this realization, that I will never again see Jason’s mischievous, cocky smirk, is that he gave us an incredible gift of two amazing lives whom are Jayson Junior, and Israel. He also gave us thoughts which will continue to provoke our very existence. When he was nineteen, he taught, “You have to live your life not by others’ standards… When you choose on your terms, at least it is on you.” Love you Jason.

What comes immediately to mind when I look at the below photo is, I have lost both of them. I remember when it was taken. It was Jason’s birthday. He and our mother were to spend the day together; just the two of them. He was so annoyed I was brought along. When the photos were developed, he tried to scratch my face out of them. If you look closely you can see the scratches. We were very young, so we lived for each other’s annoyance.

This next photo is of us, Jason and I, on our first day of a new school year. In spite of the many sibling disputes we naturally had, there were these moments:

2 thoughts on “Miss You Entirely”